One of the origins for farming astringent persimmons in this region dates back to “Tateishigaki”, which were made in the Tateishi settlements.
A journal produced by the local temple during the Muromachi period (1558-1570) and another famous literature ‘Honchoushokkan’ published in the mid Edo Period (1695) contains a mention of the persimmon farming in the area mentioning it “rather nice”. Confirming that the persimmons harvested in this area were known in Edo and Osaka.

The temple in Miho Rishakuji has always been known as the kanon of Persimmons. The temple possesses two wooden plaques. One of which depicts a boat sailing down River Tenryu to deliver persimmons from the Suruga Bay. Other with the persimmons on horseback delivered over mountains.

In Minami Shinshu, dried persimmons are said to bring luck when eaten around new years, however, around Edo it was likely to have just been eaten just like a normal snack. In Ise, it was amongst other items such as dried fish, Ise lobsters, bitter oranges and sweets made of chestnuts that were presented to their home altars.

Houses in Tateishi took turns to host the work of peeling and hanging. Especially for the peeling process which takes effort settlers would place rice cakes on top of all the persimmons, work together until there all peeled and eat the rice cake as reward before they went back to their houses. These forms of labour were called “yui”.

The Development of Tateishigaki Distribution

This is a page from a literature “Miruyomumanabu Iida Shimoinano Rekishi” by Iida History Research Institution. Regarding the distribution and the development of Tateishigaki.

Today there are many fruits harvested around Iida and Shimoina area which roots back to harvesting persimmons in Tateishi. By the time Tateishigaki was brought to Tokyo it involved many individuals and groups. It was a major operation for the time. Lets look at what it was like at the time from the wooden plaques held at Rishakuji.

The plaque is presented to the temple in 1837 by the sailor’s captain with Sanoya Kazou from Yamadagouchi Village (now known as Shimojyou Village) as the sponsor. The art is by Furuta Takamaro from Oyada Village (now Shimojyou Village).Tateishigaki that were carried by boats on the River Tenryu were used for Hagatame a ritual where the Shogun of the time would wish longevity at the beginning of the year by eating something with a hard texture. Towards the end of the Edo period Tateishigaki became one of the must-haves for those living in Edo. The sellers would sing “Tateishi, Tateishi” and walk around selling them. The temple this plaque is presented to is known as the Kannon for Persimmons and has been a place of worship.

The large ‘S’ shaped object in the middle is the River Tenryuu. In reality it runs rather straight from the south to north so it is obvious to see that it has been deformed in the picture.The red architecture on the top right corner is the Rishakuji, the temple where this plaque is held and the river on the left is Achigawa. Areas depicted in these plaques are just of the south of Tenryuukyou, so the river disappears into the mountains. It is possible to speculate that this is around the borders of Shinshuu, Sanshuu and Enshuu.

The plaque pictures many individuals. At the temple there are two females in front of Nioumon (gate), two males on the approach in between the gate and the temple. These people seem to have dressed up for the occasion so they are likely to be the prayers on their visit. Rishakuji is drawn proudly as the Kanon of Persimmons.

Over the left side of Achigawa there are two men who looks to be a traveller. They are likely to be the intermediaries who travelled great distances to purchase Tateishigaki. In the late autumn and early winter when the dried persimmons reached shipping season many came from Iida and Edo to purchase. They bought Tateishigaki directly from peasants or from warehouses that are ran by the local agencies likewise in the plaque. The warehouse (with the ‘周’ character without the ‘ノ’ part) is thought to be the warehouse for the sponsor of plaque Sano Kazou’s house.

Looking at the artwork furthermore, there are many men with horses (Umakata). These horses have Tateishigaki on their backs. Horses heading to the river carried the produce to the ships, those facing the opposite direction carried them over the mountains to Namiai and over to Nagoya and Okazaki and so on.

Tateishigaki that were carried on horsebacks to the Tenryuu ports were sailed to Kaketuka (Iwata City, Shizuoka). `There are many ships picture on the river. Some sailing upstream, some sailing down stream with produce. Yagura Fall has many rocks and swirls on the way. The ships that are passing the dangerous parts of the river have their masts folded. It was a difficult journey since the river had many dangerous spots. There is a man pulling his ship where the river meanders to the right, people would pull their ships onto land to avoid certain dangerous points along the trip. There is another man doing the same in the plaque.

In the middle of the screen there is a house with many warehouses. This is the house of port wholesaler. The wholesaler has a large garden where the produces were collected including Tateishigaki waiting to be loaded onto ships. There are intermediaries around the wholesaler. Who looks to be a clerk is near the shelves. Canals next to the wholesaler have ships with their masts folded. This is likely to have been from upper stream to the Kawada (Achi Village), Nukuta, (Yasuoka Village), Odomo (Anan Village).

To Pray for Business Prosperity and Safety

This plaque was donated to Rishakuji by four wholesalers and captains who sailed the River Tenryuu. Their names are shown underneath the plaque on the right. It was Furuta Takamaro from Oyada Village who painted the plaque. They would have wished for safety and prosperity of their business by donating the plaque to the temple. There is also another plaque donated in 1814 from Edokakitonya showing the depth of faith as the Kanon for Persimmons. 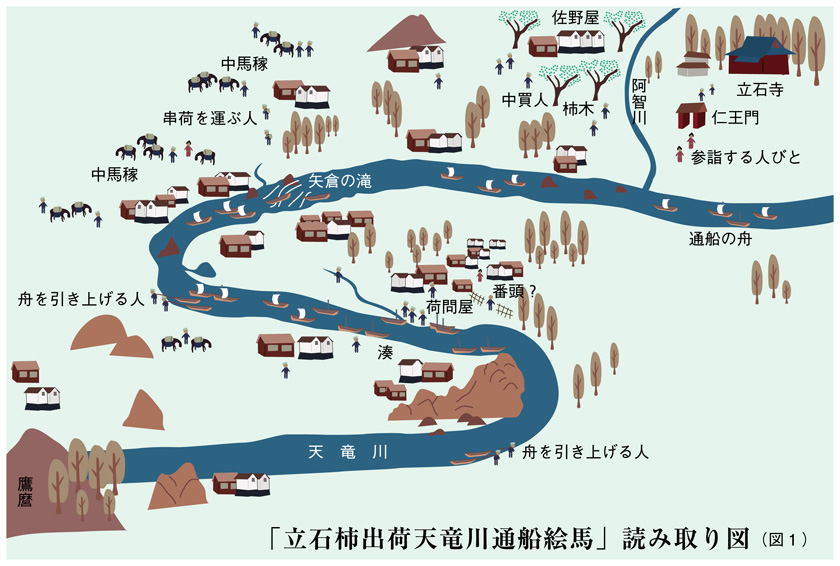 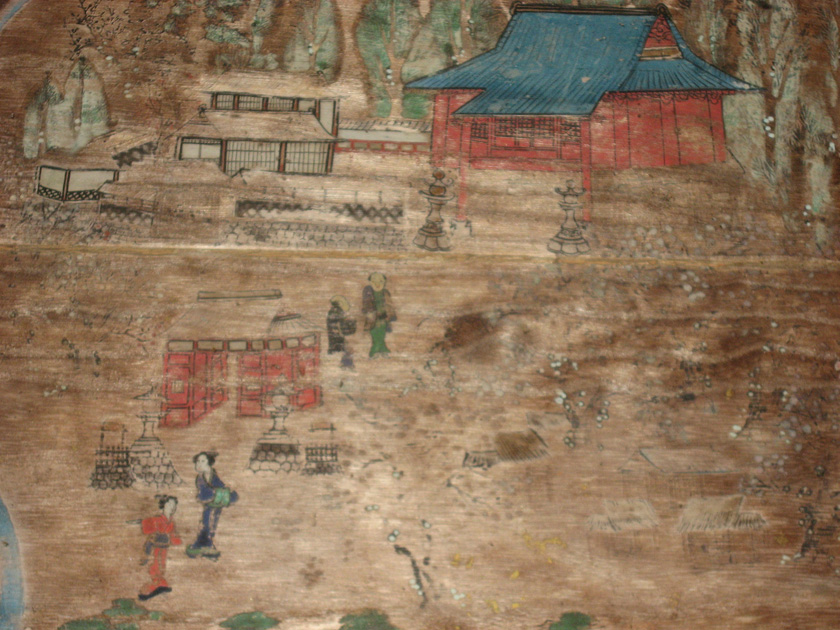 Fig. II Rissyakuji and its surroundings. The prayers could be seen on the approach to the temple. Below four figures are regarding the Tateishigaki syukka tennryuugawa tuusenn plaque. 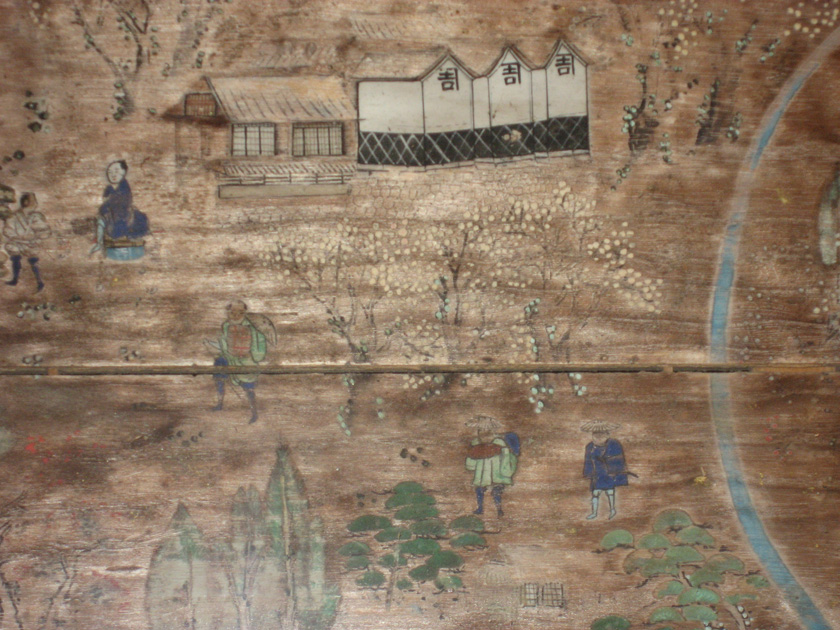 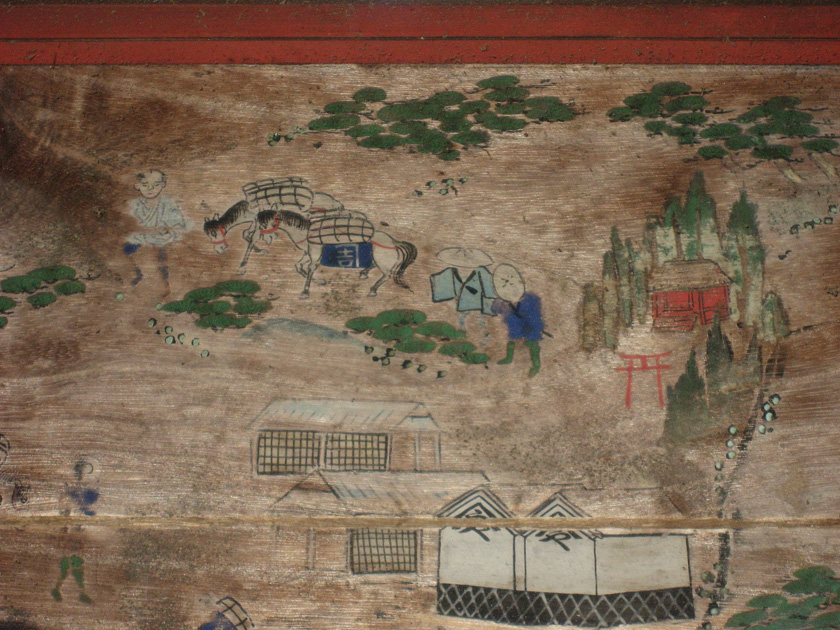 Fig. IV Dried persimmons carried on horsebacks. Horses were the main transportation for shipping to Owari and Mikawa areas. 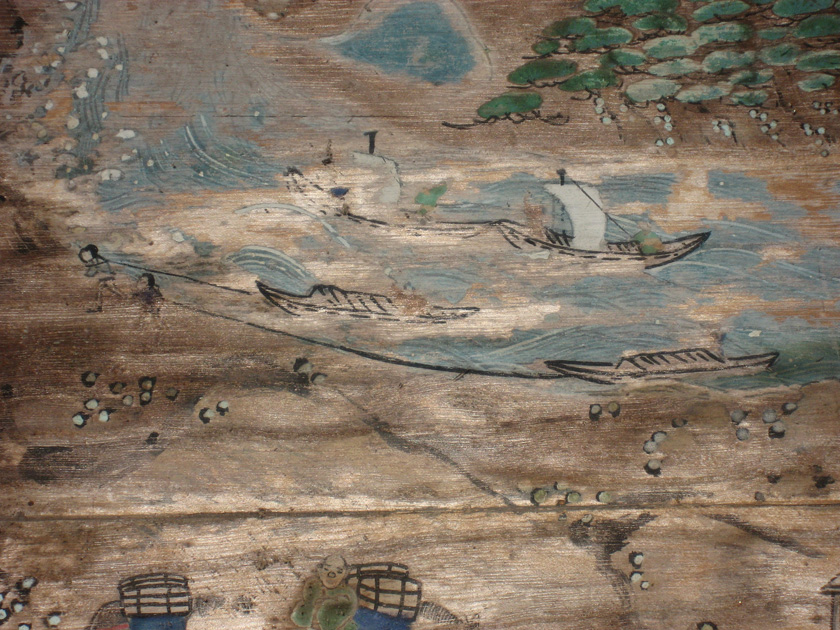 Fig. V Rapid streams of River Tenryuu meant that ships had to be pulled up by manpower after sailing down stream. 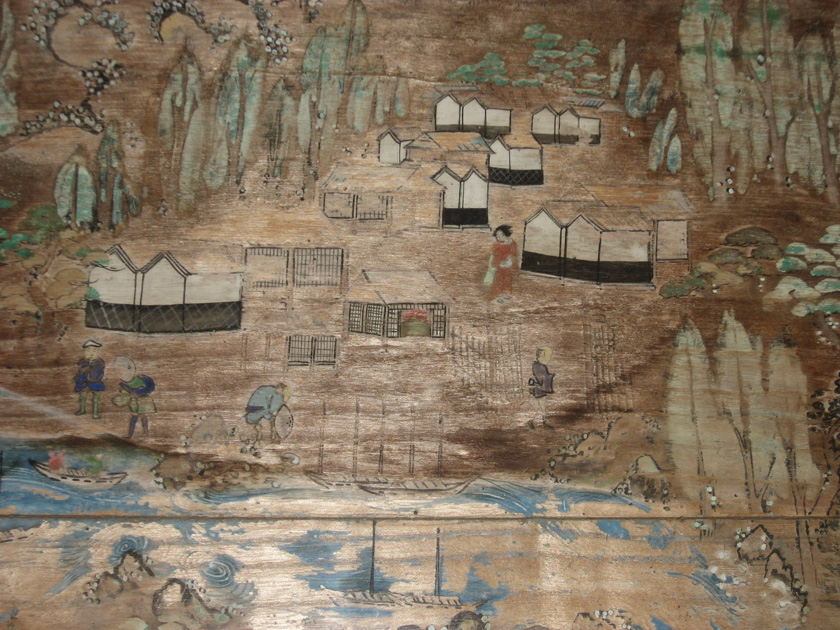 Fig. VI Port wholesaler. There are number of ships at the port and intermediaries can be seen.

“Kushigaki”for the Lords and Peasants

During the battle of Osaka Fuyuno Jin, the feudal lord of Ina and Ajima Chikuyori Naosuke sent dried persimmons to Ieyasu’s main entourage Honda Masazumi. It was a gift for luck in the battle. As this example shows dried persimmons were already a specialty produce in the early modern period. Let’s take a look at this from both the feudal lords and the peasants’ side.

For feudal lords dried persimmons were not only valuable gifts to Shoguns and other feudal lords but also one form of taxation from the people. There is a tax receipt from 1625 in Toraiwa Village (now Shimohisakata Iida City) that documents dried persimmons taken as tax. Later on these taxations became ‘Kakiai’, in Taksu it was ‘Kakinengu’

What became the check book for tax was ‘Kakinoki Aratamechou.(Fig. VII). In this book every persimmon tree in the area was listed by location, owner and the amount of fruit it produced, taxes were calculated accordingly to this book. It was referenced in this book as 100 dried persimmons to 600g of rice. However the production of persimmons varied a lot every year so it was decided after inspection (kemi) every year. After the 18th century the taxation by persimmons had a fixed rate.

Persimmons were very important crop for the peasants. The process began around 20th October. Peeling the skin during the day and skewering the peeled persimmons from the previous day, the peeling went on until late at night. These were short-term labour intensive work hiring extra workers and asking for help. 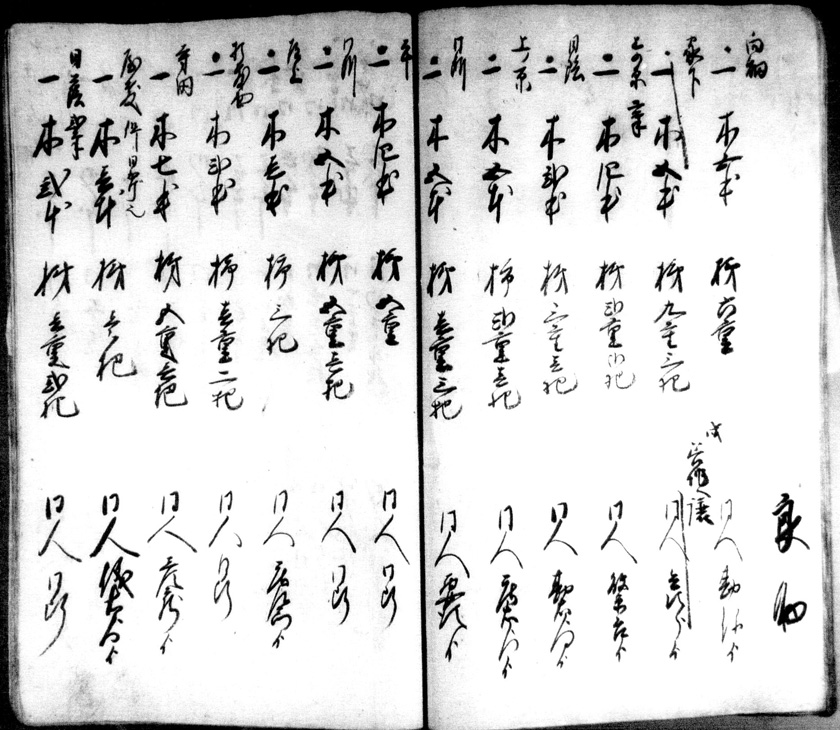 Fig. VII 1838 (Tenpou 9) Kume Mura Kakinoki Nayose Cyou. It is with the family who used to lead the area. 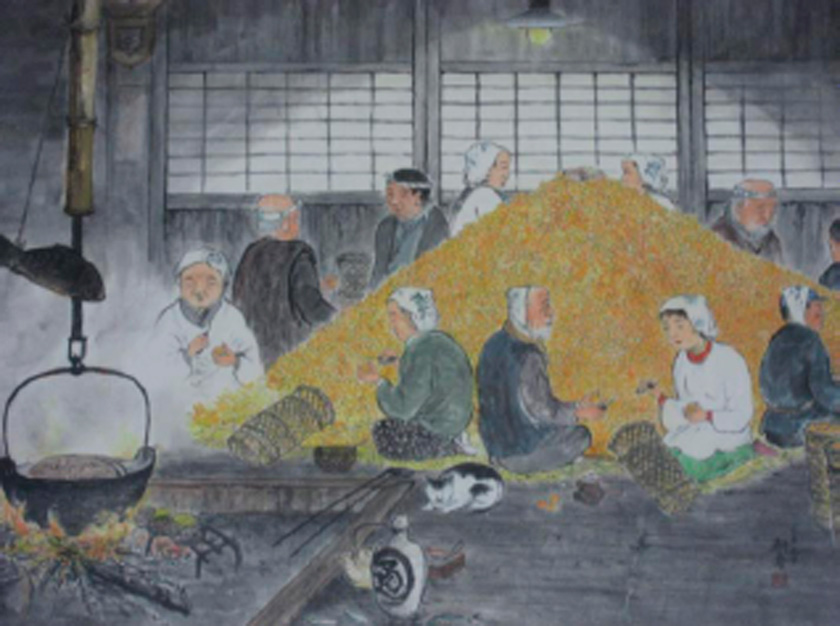 Fig. VIII People peeling persimmons. There is a bowl placed at the top of the pile with snacks inside as a reward for the workers.  Post WWII by Higo Koujyu held at Miho Community Centre.

(1)Evidences of wholesalers alliances could be seen in the check books of Kuwanoya based in Kuwatorazu Village (Yasuoka Village). They gathered intermediaries who bought dried persimmons and paid advances.

(2)furthermore in 1830 (Bunsei 13) Takasu Clan decided to open Sanbutsukaisho.On this occasion the wholesalers claimed that they sold the persimmons historically. Creating monopoly in the persimmon market in Edo.

(3)lead by the wholesalers who donated the plaque followed by seven or eight sweet shops presented persimmons to Edo Castle. Tangoya Yasuemon is noted in the Mizugashi Osameninmou Shiawasechou created in 1865 (Keio 1).

From the points mentioned above it is possible to understand that the persimmon wholesalers had huge influences on distribution. Also renowned as sweet shops. They were located around Kanda where there was a market. Persimmons that were shipped down River Tenryuu were unloaded around Mansei Bridge near Kanda Station and Yokkaichi (Kabutochou).

Tateishigaki is often associated with Hagatame, this may be because the lord of Tateishi Village Kondo had sent then to the Shogun but might also have roots to the fact that these wholesalers were very powerful at the time. 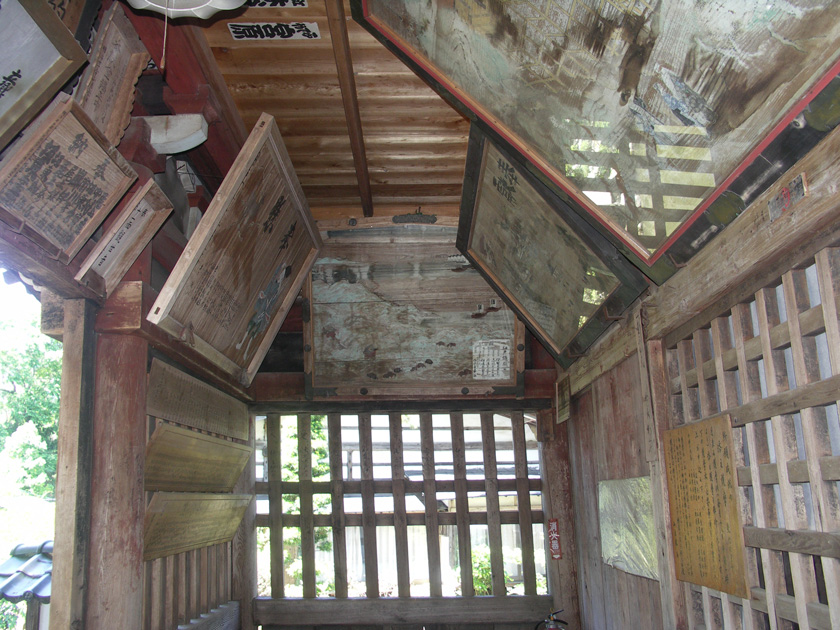 Fig. IX Plaques Donated by Persimmon Wholesalers in Edo. It is displayed alongside other plaques at the main hall of the temple. 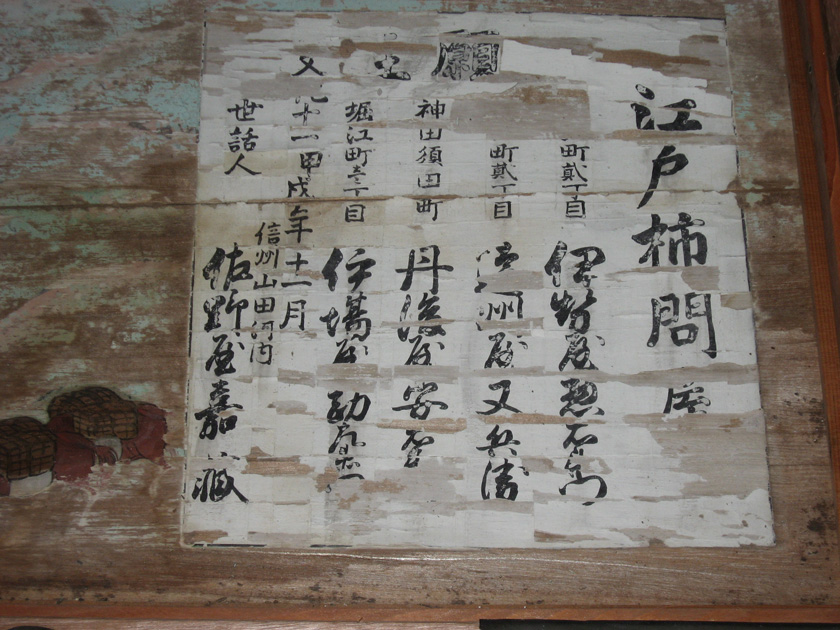 Fig. XI Present view of the Yokkaichi Cho where the persimmons are thought to have been unloaded. (Near Edo Bridge Cyuuouku Tokyo) 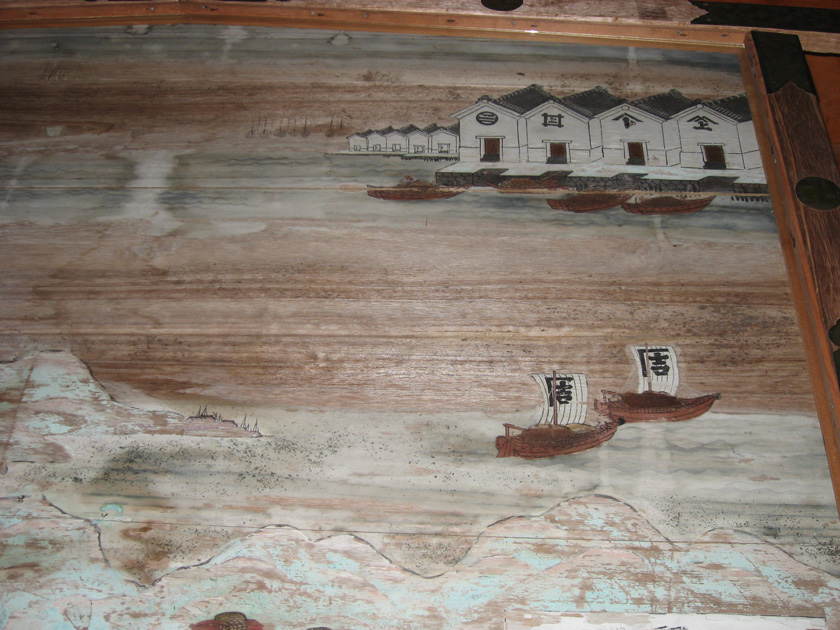 Fig. XII Persimmons are shipped across the ocean. The warehouses along the riverside are said to have been owned by those wholesalers responsible for the donation of the plaque. 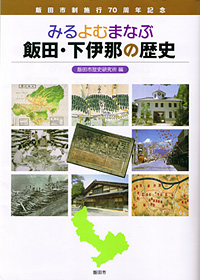 The passage regarding the section ‘Distribution and the Developments of Tateishikaki’ is taken from 「Miru Yomu Manabu History of Iida-Shimoina」(p52-) is shown with the permission of the author Maezawa Ken.

All rights reserved for this page.